What’s next for Victoria Police’s efforts to end racial profiling?

The letter can be read here (PDF)

The reply from Victoria Police can be read here (PDF).

See Equality in Not the Same: The Next Steps for more information about four clear steps to ensure all Victorian communities receive highly professional, human rights compliant and impartial policing. 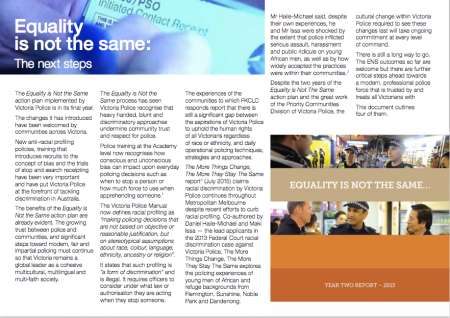 POLICE reject it as time-consuming and counter-productive, but human rights groups say it collects vital information to prevent discriminatory policing….

“We think it is vitally important that we start to get verifiable, reliable data on police interactions at all levels,” Ms Vickery said.

She said being thought of as less because of your colour was hard enough, but when that came from people in authority it could create crippling levels of fear, anxiety and mistrust.

While it has been argued that police asking people they have stopped about their ethnicity could escalate a situation, Richard Deng from the South Sudanese Community Association in Victoria said the recording ethnicity would be a vital tool to determine whether some racial groups were targeted more than others.

“If police explain why they are asking their ethnicity it would not be a problem,” he said.

In December 2013, Victoria police launched a three year Equality is Not The Same action plan to address community concerns about discriminatory policing after many years of relentless campaigning by community, legal and human rights groups.

“It’s the outcome of everything we’ve been fighting for, and it kind of justifies what we’ve fought for,” Maki Issa – ABC News (31/12/13)

It is now in it’s final year.