Systemic racism, violence, and the over-policing of minority groups in Victoria

New research by Prof Leanne Weber has found that both ‘community policing’ and intelligence-led or ‘risk-based’ policing can lock in discriminatory targeting of young people.

The persistent failure of governments around the world to address systemic racism and police violence has engendered deep distrust of police in many communities, and sparked widespread protests.

In Australia, First Nations activists have been at the forefront of Black Lives Matter protests and other efforts to “close the criminal justice gap“.

Australian police forces were brought into being to protect the interests of white settlers against the country’s first inhabitants whose lands and lives were being systematically taken away. This history has translated into contemporary patterns of over-policing and the world’s highest rate of incarceration.

Jude McCulloch argues that contemporary styles of policing divide communities into “those to be protected, and those seen as a threat”, and that this boundary is often demarcated by race.

While First Nations people have always been seen as a threat to settler society, other groups have been cast in that role more recently, making them objects of intensive policing.

The “African gangs” phenomenon, fuelled by irresponsible media reporting and divisive political rhetoric, is an example.

In a study I conducted in the southeast of Melbourne, examining the relationship between police encounters and belonging, young people of Pasifika and South Sudanese origin emerged as the non-Indigenous groups most likely to come to police attention. Altogether I spoke with about 80 participants, including young people, youth workers, and adult members of both communities.

These discussions produced many examples of individual and systemic racism, and allegations of excessive use of force, which undermined the positive efforts at trust-building being made by specialist youth and community liaison officers within Victoria Police.

I asked research participants to recount both positive and negative experiences with police. Interactions were considered positive where police had listened, had explained their actions, been friendly, courteous or understanding, or had exercised discretion in the young person’s favour. This applied even when the young person admitted some wrongdoing.

But positive experiences were overwhelmed by far more numerous reports about unexplained stops, racial vilification, and other hostile, discriminatory or violent encounters.

Certain officers were considered to be particularly prone to hostile and openly racist behaviour. One young man who was in conflict with the law recounted a detective who would “chase” him around, hurling racist abuse, and threatening to “make your life a living hell”. Another youth said he was asked during an arrest whether the handcuffs reminded him “of when you were back on the boat”, had been punched, then told: “I’d hate to be your fucking colour, I’d hate to fucking be black.” Another claimed that police often said: “You guys are aliens. You don’t belong here”.

One young person described this harsh and exclusionary treatment as “the easy way to get up high in their career”, suggesting that officers who behaved this way were rewarded. But racialised understandings of “how policing is done” can become embedded in routine practices without either direct instructions or deliberate rewards for targeting certain groups.

Almost all participants, including many not already known to police, reported being stopped on the street, or while driving, for no apparent reason.

“Police just come and hope they can find something wrong with your car, driving without a licence, etc. They find nothing and they just walk away and feel ashamed, but they don’t say why they stopped you.”

In the absence of explanations, these interventions were attributed to institutional racism. One participant from a Pasifika background said:

“If I’m seen by the cops, I know I’ll be looked at in a certain way … they stereotype people.”

“I don’t know why police are stopping me, just for being a black person.”

Someone else recalled a police encounter that had happened to her friend, saying:

“It came out of nowhere; he’s not known to police. I think they picked on him because of his skin colour.”

Although no statistics were produced from this study to “prove” that young people from these backgrounds are being stopped disproportionately, many participants reported being singled out within groups on the basis of their skin colour. One young person explained:

“They are doing their jobs; we understand that. But we get picked due to the colour of our skins. They looked bored. They don’t care about the white or Asian who is doing the same thing. They come straight to the black person.

Moreover, although Pasifika youths also reported high levels of police intervention, it was widely believed that an informal hierarchy was in operation, with young South Sudanese Australians at the “top”. As one experienced youth worker explained:

“The Australian kids get walked past. [The police] go straight to the Sudanese, and then they just move them on and start, you know, harassing them … And then they went to our [Pasifika] kids. I said, ‘No leave them alone … You can have the white ones’. But they didn’t go near them. They just walked around them and carried on.’

While many young people had grievances about their personal treatment by police, all participants made well-balanced judgments about the reasonable limits of police powers, taking into account their law enforcement role.

“Their job is to arrest you, interview you, and charge you, right? They don’t need to assault you, swear at you, pepper-spray you.”

Other young people cited examples of the use of pepper spray or batons they considered “unnecessary” or “excessive”, or said that pepper spray should not be used at all.

There was a prevailing sense across both young and older participants that there was no way to change these practices, and no one to complain to.

“What can I do about it? If I go try and complain about it I have to talk to another police officer’. An older participant had tried to raise her concerns with police but concluded: ‘They don’t care. No one cares’.

An older participant had tried to raise her concerns with police but concluded: “They don’t care. No one cares.” This fuelled widespread perceptions that “you can’t change the police”, and led people to “become defeated” and “lose hope”. A South Sudanese Australian woman summed up this feeling by saying: “The police are good for some people, but not for us.”

This pervasive distrust led community members of all ages to avoid contact with police wherever possible, both when out in public, and when they needed police services, as explained by this South Sudanese Australian participant:

In line with the claims of the Black Lives Matter movement across the world, sections of the Pasifika and South Sudanese communities in southeastern Melbourne report experiences of individual and systemic racism, excessive use of force, and a sense that the police are not on their side.

Research such as this offers a glimpse into what is happening from the perspective of heavily-policed groups. The next step is to take their experiences seriously, and commit to enact real change.

This article was first published on Monash Lens. Read the original article

Read more: Australia’s history is complex and confronting, and needs to be known, and owned, now

Read more: Unlocking the fear and myths around ‘African gangs’ in Melbourne 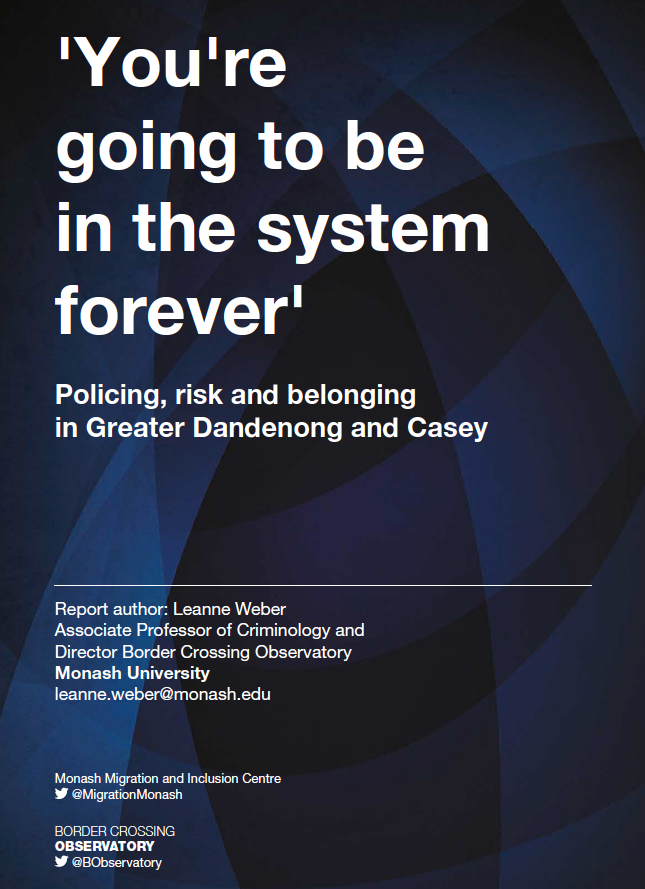 “For some years, we’ve been watching the expansion of police use of predictive technologies and programming to target policing on particular communities. It’s in part driven by racialised crime panic that Victoria experienced from 2016 to late 2018,” says Kelly, “but it’s also driven by the growth of predictive policing around the world.”

Leanne is Associate Professor of Criminology, Co-Director of the Border Crossing Observatory ,and Australian Research Council Future Fellow in the School of Social Sciences. She researches border control, migration policing and the policing of diverse communities using criminological and human rights frameworks.

Remove police from public health responses
In support of #BLACKLIVESMATTERAUSTRALIA