PAP has recently released two important reports around policing in the past months.

PAP is proud to release these two very important reports. The first is on Predictive Policing and the tools Victoria Police use to assess risk on young people.

The other is on COVID-19 Policing which was undertaken by a coalition of organisations in 2020.

Predictive and pre-emptive policing strategies that aim to prevent recidivist offending are used around the world. These predictive strategies rely on data and computerised algorithms that have been found to unfairly and disproportionately target particular racial and ethnic groups. The risk assessment tools used to create algorithms are not neutral and they are not objective but are embedded with skewed historical data, and certain assumptions, beliefs, and expectations about what the risk of offending looks like (the ‘risk paradigm’). They are used in Victoria, where police operations implement data gathering and predictive tools that embed a bias resulting in racialised police outcomes. Victoria Police continues to use predictive tools even though their use has been discredited, or discontinued, within Australia and internationally.

Our recommendations for Victoria Police are:

This report came out of a coalition of organisations capturing police interactions during the time of COVID-19 in the early part of the pandemic. The website covidpolicing.org.au was used to capture’s people’s interactions with police that seemed unlawful or harmful. The coalition then asked a number of academics to analyse the reports and commissioned a public report of their analysis.

From March 2020 onwards, all Australian states and territories passed special laws introducing new police powers and criminal sanctions aimed at enforcing Covid-19 restrictions. This report analyses 90 incident reports submitted by individuals of their Covid-19 policing experiences that were recorded on the COVID-19 Policing website between April 6 and August 1, 2020. Reports were received from all states and territories apart from the ACT, but the majority (71%) originated from Victoria, where most of the participating organisations were based.
Almost all the reports concerned complaints about police behaviour.

The report identified the following key themes from the narrative reports: 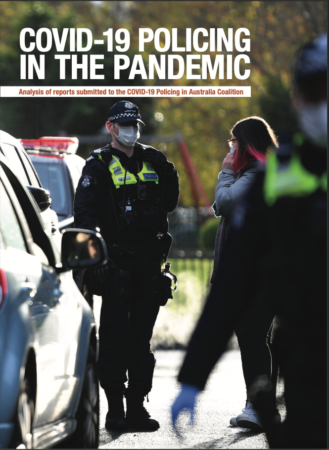