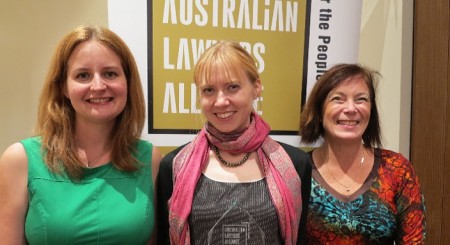 The Australian Lawyers Alliance’s highly regarded Victorian Civil Justice Award 2014 has been awarded to the Flemington and Kensington Community Legal Centre, in recognition of its outstanding work representing all the way to the United Nations, a young Victorian woman, Corinna Horvath, who was subjected to police brutality.

Corinna Horvath was brutally assaulted by a group of police during a raid on her home in March 1996. At the time of the unlawful police raid on her property, Ms Horvath had her nose fractured and was hospitalised for five days.

She was later maliciously prosecuted.  Despite taking her case all the way to the High Court of Australia, Ms Hovarth has still not received the compensation awarded to her by the County Court when it first heard the case in 2001.

Sophie Ellis, of Flemington and Kensington Community Legal Centre, accepted the award on the CLC’s behalf.

The Human Rights Committee’s decision in Horvath v Australia obligates the Australian Government to ensure victims of police assault have a right to compensation and have their complaint about police abuse heard independently.

18 years after the assault on her, the UN concluded that Ms Horvath has not been adequately compensated and that the disciplinary proceedings brought against the police involved in her assault failed to meet the requirements of an effective remedy under Article 2, paragraph 3 of the International Covenant on Civil and Political Rights.

According to the Australian Lawyers Alliance, the award “recognises the outstanding advocacy of Flemington and Kensington Community Legal Centre in Ms Hovarth’s case.”

“We congratulate Flemington and Kensington CLC in their dedication, commitment and perseverance to social justice and human rights.”

More information about the case can be seen at Flemington and Kensington CLC.