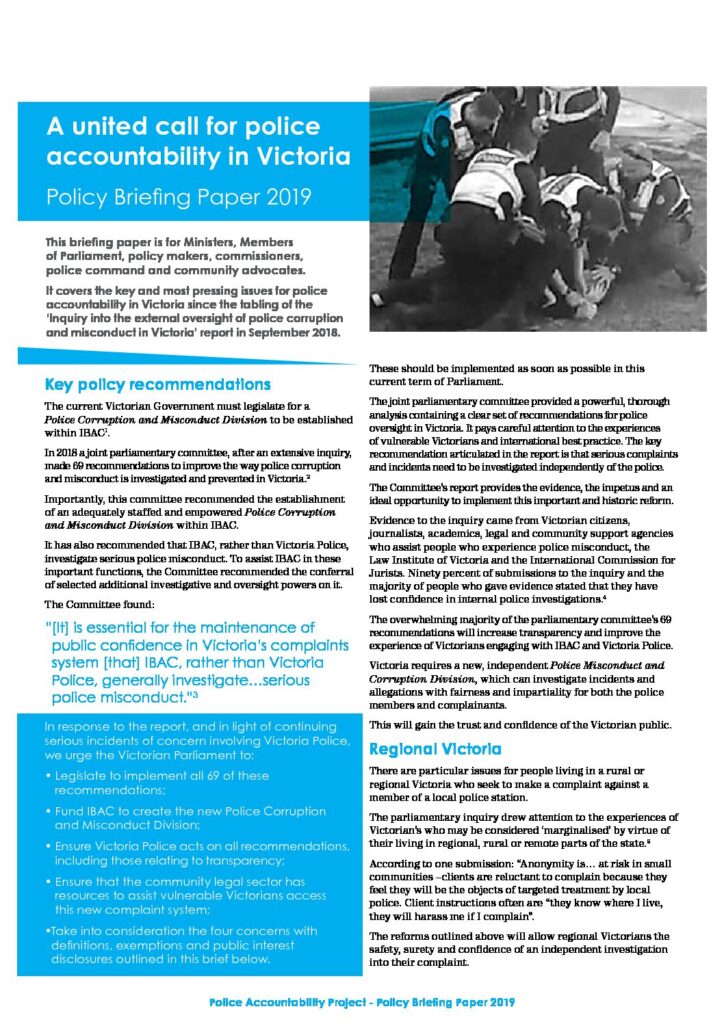 A united call for police accountability in Victoria: Policy Briefing

It covers the key and most pressing issues for police accountability in Victoria since the tabling of the ‘Inquiry into the external oversight of police corruption and misconduct in Victoria’ report in September 2018.

The current Victorian Government must legislate for a Police Corruption and Misconduct Division to be established within IBAC[1].

In 2018 a joint parliamentary committee, after an extensive inquiry, made 69 recommendations to improve the way police corruption and misconduct is investigated and prevented in Victoria.[2]

“[It] is essential for the maintenance of public confidence in Victoria’s complaints system [that] IBAC, rather than Victoria Police, generally investigate…serious police misconduct.”[3]

In response to the report, and in light of continuing serious incidents of concern involving Victoria Police, we urge the Victorian Parliament to:

These should be implemented as soon as possible in this current term of Parliament.

The Committee’s report provides the evidence, the impetus and an ideal opportunity to implement this important and historic reform.

Evidence to the inquiry came from Victorian citizens, journalists, academics, legal and community support agencies who assist people who experience police misconduct, the Law Institute of Victoria and the International Commission for Jurists.  Ninety percent of submissions to the inquiry and the majority of people who gave evidence stated that they have lost confidence in internal police investigations.[4]

The overwhelming majority of the parliamentary committee’s 69 recommendations will increase transparency and improve the experience of Victorians engaging with IBAC and Victoria Police.

Victoria requires a new, independent Police Misconduct and Corruption Division, which can investigate incidents and allegations with fairness and impartiality for both the police members and complainants.

This will gain the trust and confidence of the Victorian public.

There are particular issues for people living in a rural or regional Victoria who seek to make a complaint against a member of a local police station.

The parliamentary inquiry drew attention to the experiences of Victorian’s who may be considered ‘marginalised’  by virtue of their living in regional, rural or remote parts of the state.[5]

According to one submission:  “Anonymity is… at risk in small communities –clients are reluctant to complain because they feel they will be the objects of targeted treatment by local police. Client instructions often are “they know where I live, they will harass me if I complain”.

The reforms outlined above will allow regional Victorians the safety, surety and confidence of an independent investigation into their complaint.

For over forty years communities in Victoria have been calling for independent investigations.

It was a key recommendation of the Royal Commission into Aboriginal Deaths in Custody (RCIADIC) in 1991. [6]  Numerous Coroners and the Victorian Parliament’s Law Reform Committee have recommended independent investigations of police contact deaths.[7]

If implemented, an independent Police Misconduct and Corruption Division will represent an historic reform leading to meaningful change for all Victorians.

It will be an Australian first.

Victoria has a proud tradition of leading improved human rights outcomes in Australia, and has the opportunity to embed human rights principles into its police accountability system.   A fully-fledged, independent body that is adequately resourced to investigate police misconduct, and has a strong culture of decision making based on human rights is critical to this.

There is broad community and government support for this reform.  The joint parliamentary IBAC Committee demonstrated a sound bipartisan approach to this complex area of reform. IBAC, now in its sixth year of operation is well placed to take on this expanded and specialist role.

Furthermore these reforms are supported by many former and serving members of Victoria Police who want to see culture change and are frustrated with internal complaint processes.

Despite our overwhelming support for the 69 recommendations in the report, we wish to advise legislators of specific concerns with three of the report’s recommendations which will impact upon the effectiveness of its accountability outcomes.

We are also concerned about implications for complainants whose complaints are assessed as ‘Public Interest Disclosures’) in the Protected Disclosures Act 2012.

The report recommends defining serious misconduct as conduct that could result in the officer being prosecuted for a serious indictable offence or serious disciplinary action (the threshold test). The definition also provides an inclusionary list of those offences (the inclusionary offences).[9]

Our concerns with this definition are as follows:

Secondly and perhaps more fundamentally, to restrict IBAC investigations to serious indictable offences misunderstands the very nature of police misconduct.  “Serious indictable offence” is defined by section 325 of the Crimes Act 1958 as an offence punishable by at least 5 years imprisonment.  We contend that a wide range of police conduct, considered by the public to be serious police misconduct would not reach this threshold.  To understand nature of police misconduct and public complaints, it is critical to recognise that there is no equivalency between the concept of civilian criminality and police misconduct. The two are quite separate.  While civilians can act unless they are prohibited from doing so, police may only act where they have power to do so.  They ‘must point to lawful authority for all actions undertaken’.[10]

Where police engage in over-reach of their powers, they may not commit a serious indictable offence, but they may commit a serious human rights violation.  To require a human rights violation to also be a serious indictable offence is to completely misunderstand the role of police in detaining, searching, controlling, and limiting the freedoms, liberties and dignity of people.  Consequently it is our firm view that the inclusions listed in the definition above should not be subject to the threshold imposed in the recommendation.

While it is true that many of the items in this list come within the definition of a human rights violation, to prevent the predictable disagreement between the IBAC and individuals about what constitutes a human rights violation, we believe these items should be expressly included in the list of matters IBAC investigates.  This is all the more important in light of recommendation 26 relating the Administrative Law Act.

The right of an individual to seek review of a decision made under an enactment to the courts is fundamental within a free and democratic society.  IBAC has argued that judicial review of its decisions causes cost, delay and unreasonable use of its resources.  This argument could equally be made by Centrelink, the Office of Housing, indeed every agency that is subject to judicial review.

Where IBAC makes a decision not to investigate a matter it should be subject to judicial review.[1]  Judicial review is essential to consistent, fair and lawful decision-making. Transparency and accountability are necessary safe guards in our justice system to ensure people receive a fair hearing.

However the Committee provides no reasoning for reaching this finding.  If Victoria Police investigations should be subject to the FOI Act, why shouldn’t IBAC?  Vic Pol investigative techniques are just as important as IBACs.  As we have previously argued, the FOI Act includes all the provisions IBAC and Vic Pol need to protect the integrity of their investigations and neither IBAC nor Vic Pol have never demonstrated the need for why they should be give any additional protection.  In our view the IBAC Committee have not provided a satisfactory case for their finding that IBAC should continue to be exempt from the FOI Act.

The Supreme Court has found that police complaint investigations do not fall within the class of documents that enjoy public interest immunity, and that individual documents also won’t enjoy immunity, absent of ‘a compelling case for secrecy’.[12]

The public interest disclosures regime is a further concern in considering whether to make a complaint about police misconduct.    If a complaint is assessed as a protected disclosure complaints are not permitted to speak publicly.  For issues of transparency and personal and public advocacy this has serious implications.[13]

Furthermore, there is a risk complainants who are assessed as having made a protected disclosure may not be able to initiate civil proceedings because to do so would reveal their identity contrary to section 53 of the Protected Disclosures Act 2012.

We recommend that Parliament legislate to permit complainants to opt out of the public interest disclosures regime if they wish.  This allows complainants to retain control over the level of protection they require when making a complaint.

We urge the Victorian Parliament to, taking into consideration our concerns outlined above, swiftly legislate to implement all 69 of the recommendations contained in the ‘Inquiry into the external oversight of police corruption and misconduct in Victoria’ Report.

This policy briefing paper is the third in a series.   We urge that it be read in conjunction with the Independent Investigations of Complaints against Police, Policy Briefing Paper, a comprehensive 44 page policy guide (2017)[14]

This Briefing Paper has been endorsed by the following organisations:

[2] The ‘Inquiry into the external oversight of police corruption and misconduct in Victoria’ report can be found here: https://www.parliament.vic.gov.au/58th-parliament/ibacc/article/3802

[7] Victorian Parliament’s Law Reform Committee on the Coroners Act 1985. The Committee stated that it there was a “vital need” for a Coroner to be able to appoint an independent person to lead the investigations on the Coroner’s behalf in police-related deaths. https://www.parliament.vic.gov.au/publications/fact-sheets/252-lawreform/inquiry-into-the-review-of-the-coroners-act-1985

[9] This is the threshold currently used by the Law Enforcement Conduct Commission Act 2016 (NSW).

How close is Victoria to having independent investigations of police misconduct?
Our ten key concerns with policing under Stage 4 restrictions