Victoria’s anti-corruption and police oversight body IBAC has released a report investigating how Victoria Police deals with incidents that involve death/serious injury to the public.

This is the first such report released by the new IBAC Commissioner, The Honourable Robert Redlich QC,who started in the role two months ago.

The Audit of Victoria Police’s oversight of serious incidents (27 March 2018) has been described as ‘damning’ and ‘scathing’ for good reason.  The audit which examined 142 serious incident ‘oversight’ files found that police officers involved in deaths or serious injuries to the public are not properly investigated due to “clear conflicts of interest” and most cases failed to include evidence from independent witnesses, or consider human rights implications.

Coming as it does, so soon after revelations about the conduct of AC Brett Guerin, former head of Professional Standards Command and in the midst of a Victorian Parliament IBAC Committee Inquiry into the external oversight of police corruption and misconduct, this report forms yet another compelling reason why a new system of independent police complaint investigation is required.

The report is certainly welcome although not many of its findings are particularly surprising for those of us who deal with police misconduct complaint files and misconduct cases on a regular basis.  The audit’s key findings reflect those concerns raised by individual complainants,  community organisations, legal centres, law firms and even by the United Nations Human Rights Committee over recent years.

When police investigate themselves or provide their own internal ‘oversight’,  a range of cultural, procedural and systemic conflicts arise which prevent a fair, thorough and effective investigation taking place.

IBAC’s audit found that over half of the police ‘oversights’ failed to consider relevant evidence. This reflects an institutional bias. When investigators come from the same ‘interpretive community’ as those they investigate they are more likely to give more weight to the statements and perspectives of colleagues than to others.

“The audit found there was an over-reliance on police statements in relation to serious incidents. Many oversights failed to include statements from independent witnesses that could assist in verifying police versions or critically examine police statements against other evidence such as closed-circuit television,”

A recent high-profile example of a critical incident was the police shooting of two patrons at the Inflation Nightclub in September 2017. Although not covered in this audit, concerns about the initial police investigation into the shooting were raised immediately.  The police investigation may have breached the force’s own protocols by failing to immediately separate the two officers involved in the incident, allowing them to spend more than 10 minutes in a bathroom with at least one senior officer, where they removed their helmets and body armour.

A former homicide squad detective, when shown CCTV footage by journalists,  described the investigation as “seriously flawed” having broken a fundamental investigative step of keeping key witnesses separated at a crime scene (The Age, 21 August 2017).

IBAC very quickly stepped in via it’s ‘own motion’ powers to provide additional oversight of the incident investigation to this shooting and the incident is also currently subject to litigation.

An adequately resourced investigative team, made up of trained non-police investigators could have taken over the investigation of this incident straight away and maintained critical evidence and interviewing key witnesses.   Additional powers for IBAC Investigators and the resources to take on a greater number of investigations are currently being considered by the parliamentary IBAC Committee.

However, despite such disturbing findings, the recommendations by IBAC in this latest audit consist of only minor process improvements & notifications.

The core issues are systemic, structural and embedded within within Victorian legislation. As we know from similar jurisdictions around the world, external ‘oversight’ is simply not enough and more audits of this nature will not change the fundamentals of the problem, which is police having to investigate their own colleagues.

IBAC’s new Commissioner Mr Redlich recently gave evidence to the Parliamentary IBAC Committee public Inquiry. During the public hearings he spoke about the internal Victoria Police cultural issues that IBAC was dealing with;

“We are dealing with an organisation in which nothing much has changed in that respect over 40 years. Loyalty to one’s colleagues, protecting the reputation of the organisation gets precedence in some cases over doing the right thing.”

This is a systemic issue and not one of ‘processes’.  It remains up to the Parliament of Victoria to address this institutional conflict of interest. Its the missing piece in Victoria’s integrity framework.

For a detailed policy briefing on an Independent Investigations model for Victoria see here:

A handy summary of the reports key findings and recommendations: 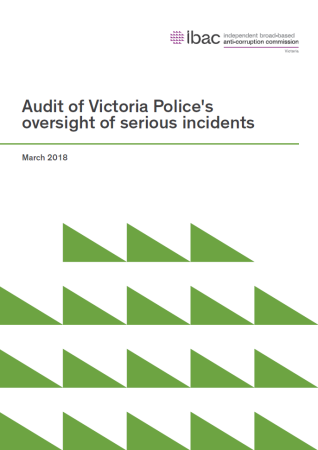 Tip of the iceberg: Stories of a broken police complaints system
Culture, Complaints and Systemic Change: Victoria Police in the Spotlight