As Victoria escalates its crisis response to the COVID-19 pandemic, Victoria Police must ensure its responses are aligned to the current circumstances and do not infringe upon the health, human rights and dignity of Victorian residents and visitors.

There is urgent need to reduce the number of people coming into contact with the criminal legal system during this unprecedented public health emergency.

The continued expansion of law enforcement authority, no matter how justified by circumstances, can expand the opportunities for abuse and lead to the violation of rights, particularly those of communities who are already experiencing a disproportionately high level of discriminatory police interaction.

This is a difficult time for many across our state. The most vulnerable among us include those without permanent housing, living in cramped conditions or with limited access to healthcare, workers who have lost income and have been laid off, children and young people whose education and daily lives have been disrupted, elders and people with disabilities, those who have already faced coronavirus-related discrimination and all of those who cannot afford to self-isolate.

People may be in public space for reasons that are not immediately obvious to police, such as the need to remove themselves from cramped conditions, from a family violence situation or the lack of a secure home in which to self-isolate.

In this context, the 500 Victoria Police members involved in Operation Sentinel have been tasked with policing of breaches of mass-gathering restrictions or self-isolation orders. Using powers under the Public Health and Wellbeing Act 2008, this taskforce can detain or restrict the movement of a person or group in the emergency area in order to eliminate or reduce a serious risk to public health.

Self-isolation and social-distancing measures that have been enacted by the Victorian Chief Health Officer and the government, including restrictions on mass gatherings are vitally important and have wide community support. Their importance is not disputed. However, the way these unprecedented restrictions are and will be enforced is also vitally important.

Whilst the policing of curfews and restrictions may seem justified, they can still be applied in a discriminatory, abusive and harmful manner.

It is vital that the enforcement of vital public health measures does not increase unlawful or discriminatory or unnecessary police interactions, especially toward Aboriginal and Torres Strait Islanders, people who are homeless and in shelters, public housing residents, children in residential care, people with disabilities and communities of colour.

As a community we are all invested in comprehensive crisis management that increases our capacity to care for each other as fellow human beings.  It would be hugely problematic if police enforcement activities further compromise the health and dignity of Victorians during this period.

According to Victoria Police human rights, equity and diversity standards, any limitations upon our human rights that can be demonstrably justified in a free and democratic society must be based on human dignity, equality and freedom, and take into account all relevant factors.

We therefore urge Victoria Police to immediately adopt the recommendations we outline below to decrease the likelihood of abusive or discriminatory policing during this extraordinary public health emergency.

All policing during this crisis must abide by Victoria Police policy rules that stipulate respectful interactions with the public.

Namely, that all Police must “act fairly, responsibly and impartially without discrimination, prejudice, stereotypes or bias.” [1]

Any targeted interactions with members of the public need to be justifiable, and cannot be based upon “attributes such as race, colour, language, religion, nationality or national or ethnic origin, sexuality, gender identity or impairment unless relevant.” [2]

Policing decisions must not be based on generalisations or stereotypes. Racial profiling is a form of discrimination and is against the law.[3] The Victoria Police’s zero tolerance policy towards racial profiling needs to be strictly enforced.

Victoria Police members must not engage in discriminatory profiling of, and law enforcement actions against individuals, simply because they are in public space. People may be in public spaces for a range of legitimate or unavoidable reasons.

We call for an immediate moratorium of police enforcement of certain offences. The moratorium should include the following:

These measures would go some way to reduce the high level of criminalisation of people due to their economic or social circumstances and reduce unnecessary imprisonment. As public health experts have highlighted, an ‘explosive outbreak’ of COVID-19 in Victoria’s prisons and custody centres could place every imprisoned person at risk and overwhelm hospitals.[4] It is vital that we take measures to urgently reduce the state’s prison population.

We urge Victoria Police to enact a zero-tolerance approach to any reports of police misconduct or abuse of powers throughout this crisis.

All allegations of police abuse in the context of COVID-19 must be subject to a swift investigation by Professional Standards Command, and if substantiated, officers will be swiftly disciplined with measures including termination.

Allegations of police misconduct that should result in an independent investigation by the Independent Broad-based Anti-corruption Commission (IBAC) should include, but not be limited to: sexual harassment and sexual assault, excessive use of force; conducting unlawful searches or allegations of racial profiling or discriminatory actions.

Directions, powers and language must be clearly defined

Police can often act in an arbitrary fashion if their powers are not clearly defined and articulated.  This generates confusion between police and public and can result in rights infringements, altercations and use of force.

There is currently a great deal of confusion between what is ‘advice’, ‘directives’ and actual legislated emergency powers provided to police.  Differing state and Commonwealth’s rules and restrictions and the rapid speed at which new restrictions are being announced are a recipe for confused interactions between police and public.

The extent and limits of any new and unusual police powers must be clearly articulated and described in order to avoid misapplication by police members. The Victorian Government must ensure that any legislative powers and directives be clearly understood by both police and public.

In conclusion, the Victorian Government and Victoria Police must prioritise the public health needs, dignity and human rights of all people who live in Victoria and avoid unnecessary, harmful and abusive police interactions in the context of this pandemic.

The Police Accountability Project will be tracking the use of emergency powers and policing during this public health emergency.   You can report an issue or incident  at covidpolicing.org.au.

If you have a complaint please refer to our Police Complaint Links and Resources page.  You can also use the Police Complaints Chatbot to assist you in drafting a letter of complaint directly to Victoria Police or IBAC.

[1] VPMP, Interactions with the Public,

[2] NOTE: Policy Rules are mandatory and provide the minimum standards that VicPol employees must apply. Non-compliance with or a departure from a Policy Rule may be subject to management or disciplinary action.

Have you been stopped by police or had any interaction with police since the new public health rules were introduced in your area? Do you feel you have been treated unfairly? Do you know of an incident that concerns you?

You can report it here 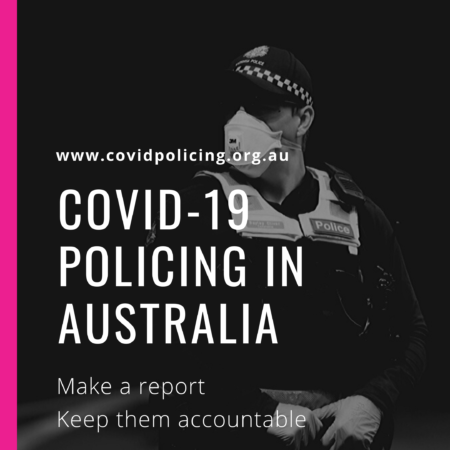 On March 16, the U.N. Office of the High Commissioner on Human Rights published a statement advising states to respond to the COVID-19 pandemic responsibly, voicing concerns regarding the possible human rights violations within measures being undertaken to slow the spread of this virus.

The Police Complaints Chatbot can assist you in drafting a letter of complaint directly to Victoria Police or IBAC.

Anyone who has experienced police misconduct can have a conversation with the Police Complaints Chatbot, which then drafts a letter of complaint and instructs you how to lodge the complaint. You will have a choice when and where to lodge your complaint. Please note that if you have been charged or believe that you may be charged, you should seek legal advice from a criminal lawyer before lodging a complaint.

“As Britons navigate their way around restrictions to try and contain the spread of the new coronavirus, there are growing fears that police officers are abusing their new powers.

“People may be in public space for reasons that are not immediately obvious to police, such as the need to remove themselves from cramped conditions, from a family violence situation or the lack of a secure home in which to self-isolate.”

I thought I was safe to walk the beach with my daughter, then the police came, Opinion, Kasey Edwards, The Age, 30 March 2020

“But if an adult can’t easily follow the hodgepodge, reactionary, contradictory and loop-hole-ridden advice, then how are we supposed to give clear rules to our kids?  I will gladly do the right thing. I just need to know what it is….

“On Saturday, the State Government announced new on-the-spot fines for those who breached physical-distancing rules designed to stop the spread of coronavirus.

The new powers governments are enacting to stop the spread of coronavirus, Simone Fox Koob and Tammy Mills, The Age, 28 March, 2020

“We take a look at the powers – some of which are being used for the first time – that Australian governments are using to try to stop the spread of COVID-19.

“Emergency powers to restrict movement is appropriate but should be limited to duration of crisis, experts says..

“Any emergency powers or legislation passed in this time of crisis must be clearly expressed, narrowly confined to deal with the immediate public health issues, time limited, and independently reviewed on a continuing basis.