Using your phone as an accountability tool 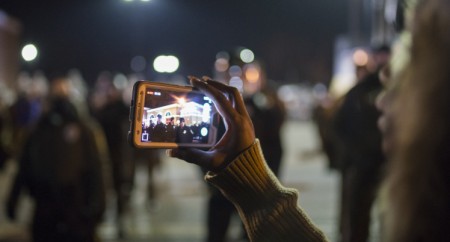 Can I film the police?

Yes – you are permitted to take film/photo graphs in public places in Victoria.  It is important that you do not prevent (hinder) police from doing their job when you photograph/film an incident though, or you could be charged with an offence.

Can police seize phones when someone has filmed an arrest or an incident?

Police do not have the right to take your phone when you film or photograph an incident such as an arrest.  They do however have the right to ask for your name and address if you are a witness to an indictable (serious) offence.   It is then possible for them to obtain a subpoena for footage on the camera or a warrant.

It is possible that police may say if you don’t hand over the phone they will charge you with “hindering police in the execution of their duty”.  However, in situations where the police do not have a warrant, you have a right to retain your own property.

1. Keep safe distance – stay out of the way of police but position yourself to get the best view.

2. If police ask you to move – move back but keep filming.

3. Hold your phone steady and still – if you pan (move the camera), do it slowly. Outstretched arms will get tired quickly – Hold your arm close to you as it helps to keep the phone steady.

4. Hold your phone sideways like in the photo above – it picks up more of an incident.

5. Remain calm and polite.   Let others speak to the police or the victim – just concentrate on the filming.

6. If you want to film your own encounter with police, hold the phone close to your chest pointing towards the police.

7. Inform the police in a clam voice that you will be filming this encounter for your own records.

8. Keep the camera filming for as long as possible.

9. State the date, time and location directly to the camera before you stop filming.

10. Get the mobile phone footage to a legal service or lawyer as soon as possible.

Your Rights and the Police

Yes, You’re Allowed To Film The Police. In Fact, You Probably Should  Melanie Mahony, Junkee, 6 March, 2013

African Australians using video as a tool against racial profiling

The protests in the United States against the killing of black men by police have highlighted the role social media video apps in recording the incidents.

Both shootings, which garnered widespread attention and sparked protests, were filmed and shared online.

Alton Sterling was shot in Louisiana after being pinned to the pavement by two white officers and the incident was captured by a witness who shared the video on Instagram.

And just days later, Diamond Reynolds live streamed the aftermath of the fatal shooting of her boyfriend Philando Castile on Facebook.

According to Anthony Kelly from the Flemington-Kensington Community Legal Centre in Melbourne, recording an incident with law enforcement does provide an extra level of evidence.

The centre represented a group of young African-Australian men who alleged Victoria Police were targeting them simply because of their race, rather than their actions.

These so-called racial profiling cases ran from 2008 to 2013, and led to Victoria Police overhauling the way in which they engage with migrant communities.

He said some of his clients now record interactions with police.

“We do advise people to be very careful if they’re deciding to film the police,” Mr Kelly told SBS News.

“A lot of people are using it for a safety and accountability tool.

“It can provide incredibly valuable evidence later on if a complaint is made or any sort of legal action is made.

“But it also can escalate tensions if it’s treated that way. People do have to be careful when filming police but they do have a right to [film] in Australia.”

Mr Kelly said people were within their rights to film police if they had been stopped or were being questioned.

“What’s important during a police incident is not to prevent or hinder police from going about their duties when you’re filming or photographing and so what we advise is for people to record from a safe distance,” he said.

But he said police don’t have the right to confiscate a phone even when they notice they are being recorded.

“We’ve had quite a few incidents where police have either seized or attempted to seize phones that they have noticed have been filming them and that’s been a problem quite often in the past,” he said.

Mr Kelly said many of these videos have been used successfully as evidence in court.

He said his legal centre had handled several cases which involved mobile phone footage as evidence.

But he said it does have its limitations.

“It might be poorly recorded or too shaky and very difficult to see exactly what’s happening.”

However, Mr Kelly it was a tool that wasn’t going away anytime soon, with more and more people hitting the record button.

“I think citizens in general are getting far more aware of the importance of filming incidences that they see are concerning for accountability outcomes,” he said.

“It’s definitely happening more and more, but it’s limited like any form of recording.”