A coalition of 56 Australian non-government organisations have called upon all Australian state and federal governments to adopt measures to track and record racial profiling throughout Australia.

In a comprehensive report released today in Geneva, that outlines Australia’s level of compliance with our obligations under the International Covenant of Civil & Political Rights (ICCPR), advocates state Australia should ensure that state and territory governments implement data-collection schemes to monitor and publicly report on incidences of racial profiling by police.

A coalition of Australian NGOs is in Geneva to brief the UN Human Rights Committee – the panel of independent human rights experts tasked with assessing Australia’s adherence to the International Covenant on Civil and Political Rights (ICCPR). The delegation will present a report endorsed by 56 Australian NGOs.

The report is intended to inform the United Nations  Human Rights Committee’s sixth review of Australia during its 121st session in October/November 2017.  The report states that racially discriminatory police conduct is contrary to articles 7, 9, 12 and 17 of the ICCPR and also recommends  that state and territory governments mandate human rights and anti-racism training for police officers at all levels.
The report strengthens recent calls in Victoria and ACT for the introduction of a scheme to monitor and prevent racial profiling by recording data of the perceived ethnicity of all people stopped by police and publicly reporting upon the statistics.
“Australia should ensure that state and territory governments implement data-collection schemes to monitor and publicly report on incidences of racial profiling by police,” said report contributor and CEO of Flemington and Kensington Community Legal Centre, Anthony Kelly.
“Our legal centre regularly hears from young people who are targeted by police based on the colour of their skin. Police must be mandated to gather and report and data about the race of people they are stopping, to prevent biased and discriminatory policing.”
In the expert report on measures to prevent racial profiling, that is gaining traction in Victoria, a group of academic experts have already urged Victoria Police to implement a scheme to track stop data and prevent unlawful stops based on race.

The report also calls on Australian governments to establish an independent body for investigating complaints against police and deaths in police custody that is hierarchically, institutionally and practically independent of the police.

“The independent body must have features to ensure that investigations are effective, comprehensive, prompt, and transparent, subject to public scrutiny and, in the case of deaths in custody, involve the family of the deceased.”

The report highlights that “no Australian jurisdiction has established a system for independent, impartial investigation of deaths in police custody or of allegations of torture and mistreatment. Complaints against police officers are primarily investigated by other police officers, usually from the same law enforcement agency.”

The report can be downloaded here (PDF). 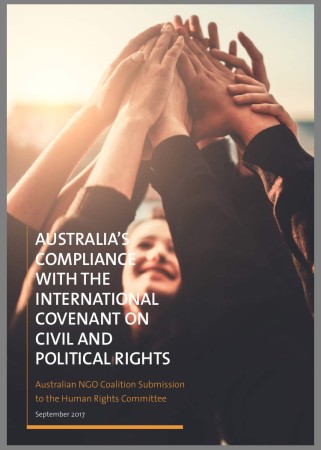 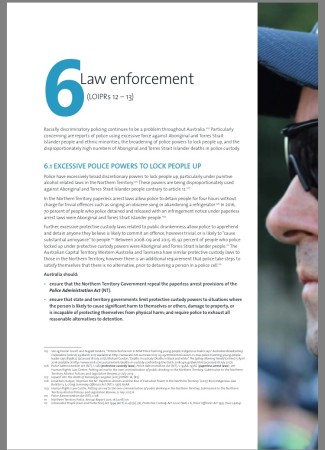 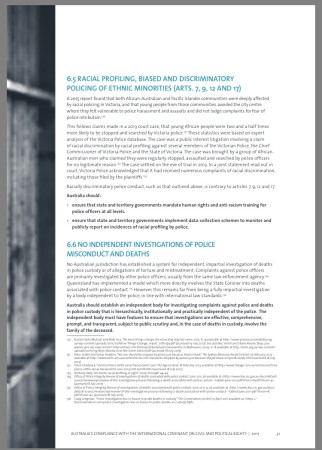