More than 100 people attended ‘Without Suspicion – Measuring racial profiling in Victoria’ – a November public forum at Melbourne University. At the forum affected communities and expert academics called on Victoria Police to take urgent steps to measure the extent of racially discriminatory policing.

People of colour are more likely to be stopped by police in Victoria, despite being under-represented in the crime statistics, but police are currently not required to record or report on the ethnicity of the people they stop – an essential measure to track racial profiling.

The forum was the first public presentation by an expert working group of academics and lawyers who are examining international best practice for ethnicity data-collection by police – with recommendations for a Victorian model due for publication early in 2017.

Speakers on the panel included lawyer and community leader Kot Monoah and community activist and applicant in the landmark Haile-Michael Federal Court racial discrimination case, Maki Issa.  Expert Working Group researchers Tamar Hopkins and Dr Vicki Sentas (UNSW) covered the drivers and trends in racialised policing and the importance of gathering and publicly reporting on police stop data to track and respond to this. 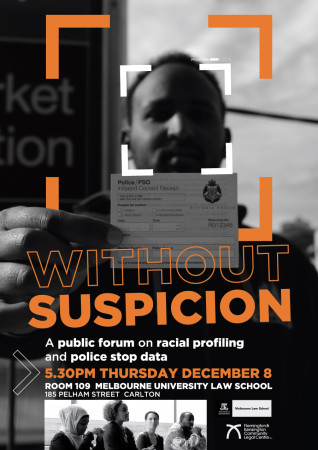 The forum included a panel discussion and interactive Q&A about the experiences and impacts of racial profiling on individuals and communities, trends in racialised policing and options for Victoria to gather and monitor ethnicity data for all police stops statewide.

Panellists strongly urged Victoria Police to roll out statewide stop and search receipting, and to urgently introduce simple measures to gather and report on ethnicity data.

‘Apex Gang’ and the racial perception of crime
One step back, many steps forward: Vic Police release the Equality is Not the Same 3rd year report