Australia’s first police complaints chatbot has been launched by Josef Legal,  Robinson Gill and ourselves to help people take the first step of making a formal complaint about police misconduct in Victoria.

The Police Complaints Chatbot is designed to assist people in Victoria making a complaint to either the Independent Broad-based Anti-corruption Commission (IBAC) or Victoria Police regarding alleged misconduct by police or Protective Services Officers (PSOs) .

Due to the sheer number of people coming to community legal centres seeking assistance with complaints against police this chatbot was designed to help people we cannot assist directly.

Police Complaints has been built to help people like Allen Tong, who was injured in an
incident involving police in 2012. Allen says of the complaints system: “The current police complaints system in Victoria has failed to bring justice to police abuse victims like myself and facilitate a culture where police are able to be above the law.”

“I think the chatbot, in particular the attentive guidance it gives, will greatly benefit police abuse victims in launching complaints against police. This is a difficult issue to tackle on your own and even more so when one has undergo a life-changing traumatic event.”

“Complaints are an important avenue for police to ensure that their members adhere to the rule of law. Having an independent, reliable, and well-funded police complaint system is crucial for public confidence.”

Police Complaints enables people to have a simple conversation with a bot, which then automatically drafts a letter of complaint with all of the information required. It then tells the person where and how to send the complaint. It will take people slowly through the process, ask the right questions and assist people to make clear and sufficiently detailed complaints.  We hope that it will increase the likelihood that the complaint will be taken and responded to seriously.

According to Jeremy King, Principal of the Police Misconduct team at Robinson Gill, “Clients repeatedly tell us of their enormous frustrations with being able to lodge a complaint regarding an interaction with Victoria Police. We are stuck with the current complaint system until Daniel Andrews acts and gives IBAC the necessary powers and resources it needs. In the meantime, this website is designed to alleviate some of those frustrations.”

Thousands of Victorians last year made complaints to the Independent Broad-based Anti-corruption Commission (IBAC) and other institutions about police corruption and misconduct. Yet the process for making these complaints is often complex, inaccessible and confusing. Today, in an Australian first, those people now have an online tool to help them seek justice.

Thanks for any assistance you can provide in getting the word out and feel free to contact us for more information, feedback on the chatbot or with any questions.

Importantly, the chatbot is not legal advice – but simply a tool to help you draft a complaint letter about Victoria Police.

If you have been charged or believe that you might be charged, you should seek legal advice from a criminal lawyer before lodging a complaint, (especially if it is within 12 months of the incident). 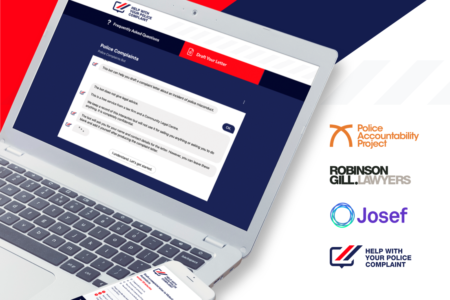 Josef (joseflegal.com) is a legal automation platform that works with the best and most
innovative legal teams around the world, from Clifford Chance and MinterEllison to local
community legal centres, to make legal services more accessible.