A new call for Police Accountability 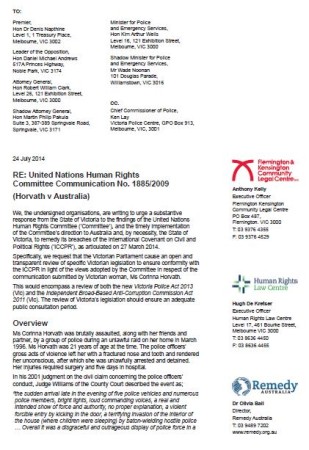 Thirteen Victorian and Australian legal, human rights and civil society organisations have today called for a transparent review of both the new Victoria Police Act 2013 (Vic) and the Independent Broad-Based Anti-Corruption Commission Act 2011 (Vic)  in order for Victoria to remedy its breaches of the International Covenant on Civil and Political Rights (‘ICCPR’).

In a four-page joint letter, addressed to Premier Napthine, the Attorney General, Leader of the Opposition and shadow ministers,  the organisations urge a substantive response by the State of Victoria to the recent findings of the United Nations Human Rights Committee on the long-running case of Victorian woman, Corinna Horvath.

Ms Corinna Horvath was brutally assaulted, along with her friends and partner, by a group of police during an unlawful raid on her home in March 1996. The police officers’ gross acts of violence left her with a fractured nose and tooth and rendered her unconscious, after which she was unlawfully arrested and detained.  Her injuries required surgery and five days in hospital.

In Horvath v Australia (2014), the Committee found that the State party is under an obligation to:

2) to amend the law to guarantee that victims of police human rights abuses are adequately compensated; and

3) to ensure that police perpetrators of human rights violations are adequately disciplined through an independent, effective and impartial complaints body.

Leave a reply to David Click here to cancel the reply