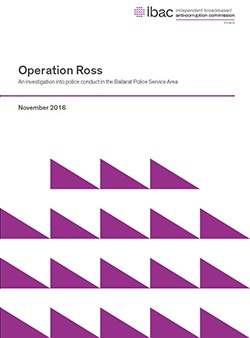 Systemic issues with police complaints are not limited to Ballarat

IBAC’s special report into Operation Ross, released on 10 Novermber, misses a vital opportunity to look beyond Ballarat to the Victorian police complaints system itself.

The report details ‘missed opportunities’ for Victoria Police to deal with ongoing, systemic issues at the station level, yet it fails to pinpoint the state-wide problems with a complaints system that relies on police self-investigating.

It’s not just about Ballarat

“The issues that IBAC identifies with Victoria Police handling of complaints, including interventions when an officer has multiple complaints, and non-compliance with the Charter of Human Rights, are not limited to Ballarat,” said Flemington & Kensington Community Legal Centre EO, Anthony Kelly.

“State-wide, the Victoria Police complaints system – where police investigate themselves – is riddled with bias and lacks transparency,” said Mr Kelly.

Under the current system while IBAC can theoretically investigate complaints against police, in practice, the overwhelming majority of complaints by the public are sent back to the police for investigation or “management”. This means that Police investigate themselves when there is a complaint of torture, degradation, abuse, ill-treatment, assault, racial abuse or excessive force in police custody.

Police investigators overwhelmingly deliver findings in favour of the police, while complainants are locked out of the investigation process all of which we saw during the Operation Ross Report

Victoria urgently needs to move to a system of independent police complaints investigation.

“Independent investigation of police complaints is already in place in many other jurisdictions such as Canada and Washington DC. While Victoria persists with a system where police are asked to self-investigate complaints about excessive force and ill-treatment, we will fail to prevent situations like Ballarat’s build-up of serious police misconduct,” said Mr Kelly.

Public Forum: Without Suspicion Measuring racial profiling in Victoria
When is a hate crime not a hate crime?