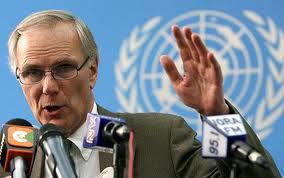 “We are on our way to becoming a police state, truly worthy of such a title. I deeply regret I have to speak this way in my own country, I would never have expected it”

Whilst Professor Alston’s comments come as no surprise to anyone following the parliament’s activities, it is his stature within the international community which gives an unsettling legitimacy to the assessment.

The speech pointed to provisions such as the exemptions from criminal prosecution for security and intelligence personnel, limitations on media freedoms and the prevention on reportage of government activity, the curtailing of public access to information and the abolition of the Office of the Information Commissioner and the winding back of Freedom of Information provisions.

Also referenced were wide ranging domestic surveillance and data retention laws, which Alston described as astonishingly Orwellian. Concern about such measures is compounded by truncated time for public debate when the bills rush their way through the parliamentary process, removing any meaningful scrutiny.

The demonization of minorities like the Islamic community and restriction of freedom of movement, made possible by preventions on travel to certain regions of the world on the say so of the foreign minister without legal limitation were further cause for concern.

None of these measures alone, says Alston, bring Australia to a police state, but together, the aggregation, the combination, the accumulation create a dramatic reduction of the freedoms Australia’s are entitled to enjoy.

The danger, according to the professor, is that once an exception to the rule of law is created there is an overwhelming temptation to expand such an exception far beyond its originally intended use.

It is then that the real abuses begin warns Alston.

The professor gives the example of the Foreign Fighters Act 2014 which he describes as not only extraordinary but as justified by an insidiously inflated threat. Alston compares Australia’s response to the phenomenon of nationals travelling to foreign war zones to those of other nations facing far greater numbers of persons making such pilgrimages.

Dismayed by the fact that many of those nations have taken a much more nuanced, holistic approach to reintegrating those returning fighters, who most often return disillusioned rather than dangerously radicalised, as opposed to Australia whose response has been purely based on a hardline security approach, the address paints a bleak picture of Australia’s future, sadly out of step with the rest of the world.

Its is the absence of protections against the internal authoritarian creep which most concern Alston. The judiciary lacks both the will and the power to stymie the parliament’s efforts, the recommendations of the Joint Committee on Human Rights are ignored, the Independent National Security Legislation Monitor was both ignored and threatened with abolition and the Human Rights Commission and its President Gillian Triggs are constantly denigrated.

The media, consumed with pushing the political agenda of its ownership, offers little defence. Alston’s list could also have included the manner in which fellow academics like George Williams, who have spoken and written at length about the Commonwealth’s legislative frenzy, are dismissed without consideration.

Of primary concern is the steady move away from any constraints imposed by international standards and norms. The problem, Alston asserts, is not only the precarious position in which Australians find their legal freedoms but the reduced credibility Australia enjoys with the international community and the weakened ability to invoke human rights in talks with our neighbours.

Why would North Korea, Iran, Indonesia or any other nation be prepared to listen to Australia proselytise on international obligations when we so willingly ignore our own? The amendment to the Migration Act formally allowing the minister to violate the customary principle of non-refoulement is a striking example.

It is perhaps preferable to view Professor Alston’s comments as a call to arms for all Australians to be vigilant about defending the rule of law and all it entails, rather than an obituary for a freedom once known.

Listening to a man so highly regarded by the international community say “We are on our way to becoming a police state, truly worthy of such a title. I deeply regret I have to speak this way in my own country, I would never have expected it” should shock the conscience of all Australians.

Supreme Court Kaba decision could set back racial profiling prevention
In search of certainty: Is the Vic Police Act a step forward?