Police Accountability Project > Commentary > When is a hate crime not a hate crime?
Starlady along with Canon, a trans man, and Azja, who identifies as queer, were leaving a local restaurant, when a male customer seated at an end table shouted, “Get the fuck out,” and proceeded to slam the door behind them.This was the same man who had previously pushed one of his friends into Starlady in the restaurant. The friend turned around and looked “freaked out” at Starlady, before they all started laughing and trying to humiliate her.
An assault in Footscray
In response to the yelling from the door, Starlady gave the man the finger, and he saw this as a reason to take things further. He took off his jacket, exited the restaurant and, with two friends, started following the trio down the street.“They started walking fast and I was like quick run. Let’s go to Coles. It’s got security,” Starlady told Sydney Criminal Lawyers. The men chased them down the street and into the supermarket. “That’s when one of them grabbed Azja and put her in a headlock.”At the same time, the man noticed that Canon was on his phone trying to call the police. He then allegedly punched Canon in the face.“I was yelling out in the Coles, ‘Please someone call the police.’ And of course, no one was doing anything,” Starlady recalled. “There was a security guard, but they weren’t coming out.” The three men then took off down the street.A lack of police responseThe security guard eventually came out and the police were called. The trio waited for about 25 minutes for police to turn up, but they never showed. As the supermarket was about to close, the trio made their own way to the police station.

When the trio arrived at the station, there was nobody attending the reception and they had to knock on the window for minutes on end, before an officer finally came out.

The three were all separately interviewed, and further disappointed as each of them was told individually that they couldn’t report the incident as a trans and queer phobic attack, or a hate crime.

“I’ve experienced many hate crimes in the past and I’m very familiar with those processes,” said Starlady, who was the last person to be interviewed. “So I was like, ‘No, I’ll be writing that this was a transphobic attack and I was targeted as a trans woman. That’s my statement.’”

In 2009, then Victorian attorney-general Rob Hulls introduced a bill before parliament for new hate crime laws, which were passed in October that year. The bill amended state sentencing laws, so that courts are now required to consider prejudice when sentencing violent offenders.

The laws apply to hate crimes motivated by race, religion, gender and sexual orientation. The appropriate sentence is ultimately left up to the discretion of the magistrate or judge.

In May 2013, Victoria police announced they were pushing for tougher hate crime sentencing laws, following the release of figures in 2012 which recorded 306 prejudice-motivated crimes in the state, including 132 assaults.

At the time, then convenor of the Victorian Gay and Lesbian Rights Lobby Anna Brown said the statistics highlighted the need to tackle crime against LGBTI people specifically. However, no changes to the laws have been forthcoming.

Starlady also pointed out that none of the trio were given a victim impact statement and she had to demand that they were each given the opportunity to draft one. Nor were they told about the GLLO officers, who are meant to provide assistance to LGBTI people in these types of circumstances.

“I don’t feel we were being informed about our rights or receiving adequate standard of care or response,” she said. “It was a poor service.”

Incident is under investigation

A spokesperson for Victoria police told Sydney Criminal Lawyers that they “responded to an assault which took place in Albert Street, Footscray about 9.25 pm on Friday night,” adding that they’re still investigating the matter.

In response to a question as to why the trio weren’t allowed to describe the assault as a trans and queer phobic attack, the spokesperson said, “Any police investigation involves looking into the facts of an incident to determine what happened”, and that this includes victims and witnesses version of events.

“We are in ongoing contact with the victims to ensure they feel supported through the process as we work to identify the alleged offenders,” the spokesperson added, outlining that they won’t “tolerate violence or hatred based on sexuality and gender identity.”

GLLO officers have since contacted Starlady to arrange a meeting. But she’s feeling unsafe in the neighbourhood where she works. “I still haven’t returned to my office in Footscray because I can’t be assured that the police will respond to acts of violence against me as a trans woman,” she said.

This assault happened at the beginning of Trans Awareness Month, which is designed to raise public consciousness about the rights of trans people.

Violence towards trans people is an issue around the world. There have been 2,190 reported cases of trans and gender diverse people murdered worldwide between January 2008 and June this year.

According to Starlady, violence towards LGBTI people is on the rise in Australia and it’s in response to a push from the Christian right and issues like the plebiscite. She asked the question, “How are the police and the government responding to this increase?”

Victoria police said it’s hard to know how many prejudiced-motivated crimes and incidents against transgender people there are in the state due to underreporting. But from discussions they’ve had with LGBTI community leaders they know it’s much greater than the amount of reported incidents.

“Queer and trans people are highly visible members of the community and sometimes our community is at significant risk,” Starlady concluded. “We’re sometimes left out when they’re talking about the LGBTI thing. We’re left out of that conversation.”

Despite a clear policy on Prejudice Motivated Crime, they were told by police they couldn’t label it a hate crime in their statements. 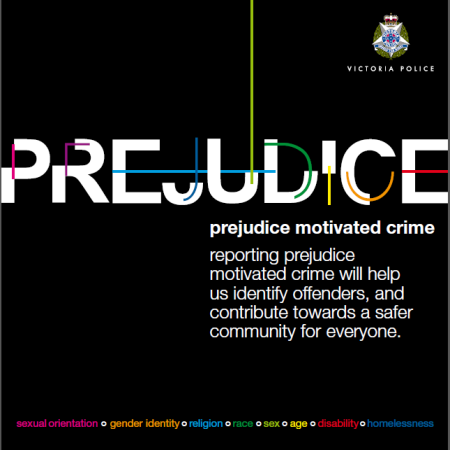