Police use of force during raids undermines Safety First principles

The Police Accountability Project is deeply concerned by accounts given by people who experienced the police raids in Melbourne over the weekend of 18-19 April, of being racially abused and  assaulted by Police members involved.

The assertion by Acting Assistant Commissioner, Tim Cartwright that “there would routinely be force used in these arrests”, which was reported by The Guardian Australia, goes against Victoria Police’s own Operational Safety Principles which mandate that force should be avoided, used only in response to an actual or perceived threat and only used where reasonably necessary.

There is no mention of use of force as ‘necessary to find weapons‘ in the police manual.

Victoria Police has provided no explanation why violence and forced entry searches conducted during the night, were necessary to arrest and question these young people.

Allegations aired publicly have included being kicked in the face by police, a broken arm and ribs, and racial abuse.

According to police accountability solicitor, Sophie Ellis, “Victoria Police’s own Policy Rules state it’s philosophy is that ‘the success of an operation will be primarily judged by the extent to which the use of force is avoided or minimised.’”

“It is extremely serious that such excessive force was used against these teenagers that it caused injury to them.” Ms Ellis said this afternoon.

The Police Accountability Project, a specialist, public interest legal practice located within the Flemington Kensington Community Legal Centre, hopes any young people assaulted and injured by police in the raids on their homes are supported to make complaints about the police officers’ conduct and that independent, transparent investigations are conducted into these young people’s allegations.

“We call on the Victorian legal community to support the young people’s families in raising their allegations about the racial abuse and violence the experienced during these police raids.” Sophie Ellis said today. 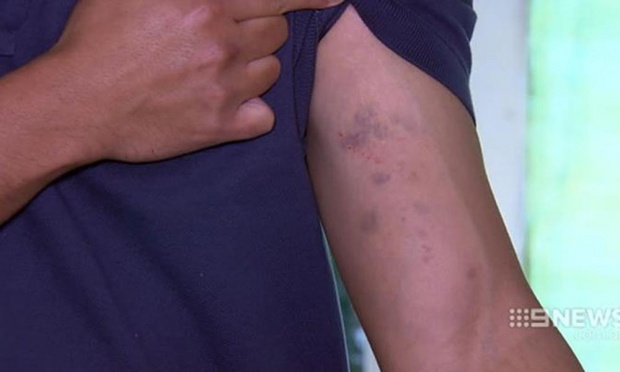 Photo of a man complaining about abuse received at the hands of Victoria police. Photo: Nine News