The overwhelming majority of complaints by the public are sent back to the police for investigation or ‘management’. What this means for Victoria, and indeed the rest of Australia is that Police investigate themselves when:

b)       capable of conducting an adequate investigation (that is , able to ascertain whether the actions of the police breach legal or disciplinary standards and whether police practices are in compliance with human rights),

e)       victim-centred and enables the victim to fully participate in the investigation, and

These standards are mandated under international law and, in Victoria and the ACT, through their human rights charters.

On 2 April 2009 the United Nations Human Rights Committee (UNHRC) observed that Australian police must be independently investigated where allegations of abuses are made, and prosecuted and sanctioned when criminal conduct, disciplinary offences or human rights abuses are exposed.

This was reinforced in the 2014 UNHRC decision in regard to Corina Horvath.

This new, updated and extended policy briefing paper addresses the persistent and reoccurring issues which have plagued Victoria’s system of police oversight. It draws upon the direct experience of victims, solicitors from community legal centres and law firms and upon decades of international research and developing best practice approaches. The 44 page document calls upon the Victorian Government to establish a body separate from police to independently investigate all complaints made against Police.

Police Accountability and Human Rights Report on its first year of operation. 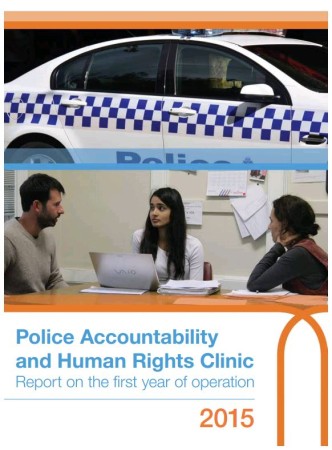 ‘The success of the civil litigation system also offers potential lessons for police complaint systems. To improve their outcomes, qualities such as victim involvement, transparency, testing of evidence, independent decision-making, disclosure of information, and legally reasoned and appealable decisions must be built into their operation’  – Tamar Hopkins in her report ‘An Effective System for Investigating Complaints Against Police’. 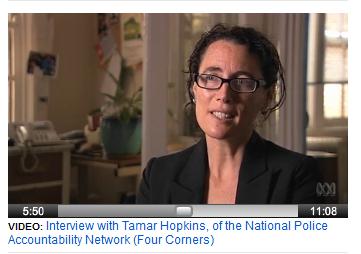 Closing Ranks, (Video, March 2012) ABC Four Corners special report by Quentin McDermott and Morag Ramsay.  A forensic account of the events leading to the death of Adam Salter in NSW and the shooting itself. Using the testimony of family, ambulance officers and interviews with the police themselves, the program examines the mistakes made by the officers and the inconsistencies in their explanations for shooting Adam Salter.  Includes an extensive interview with Tamar Hopkins.

The story of Adam Salter raises many questions, including the issue of how lethal force is used by police. But perhaps the most profound question it raises is: can the police be trusted to investigate themselves?

On 11 December 2008 in Melbourne, 15 year old Tyler Cassidy was shot dead by members of the Victoria Police.  Had this incident occurred in Belfast, London or Toronto, an independent civilian body would have commenced investigation of the incident immediately.  Trained civilian investigators would have attended the scene, separated and interviewed civilian and police witnesses and collected and preserved forensic evidence.  This evidence would have then formed part of coronial inquest proceedings, and if appropriate, a prosecution and misconduct proceeding against the police.  The fruits of the investigation would have also been available to the family for the purposes of civil proceedings and assist them to participate in the inquest.

This process is incompatible with Australia’s international human rights obligations under the International Covenant of Civil and Political Rights and also Victoria’s Charter of Human Rights and Responsibilities Act 2006.

For Victoria to be compatible with human rights requirements, an independent body must investigate Tyler’s death and all other allegations of human rights abuses.

The purpose of investigation

The purpose of an investigation is twofold.  First, it must lead to an effective individual remedy such as the disciplining or dismissal of a police officer who has violated human rights, policy or the law.  Secondly, the lessons learned from an investigation must then be used by the police agency to reduce the likelihood of future rights abuses.[1]

The investigation process must be capable of leading to disciplinary or criminal sanctions against the perpetrator(s).[2] An effective remedy for the victim is an important prerequisite to ensuring systemic reform as it removes or punishes individuals who perpetrate abuses within the police agency and identifies practises and procedures that contribute to human rights violations.

‘[P]atterns and practices of police misconduct will not become apparent without the rigorous investigation of individual complaints. Absent thorough investigation it is unlikely that discipline of an individual police officer or reform of flawed policing practices will occur. Complaint investigation is therefore the critical function of an oversight agency.’[3]

In Victoria, most complaints are managed by supervisors in local police stations.[6] Most of these complaints will not be investigated.[7]  This process ignores that fact that public complaints and the investigations of police that follow are the gateway to criminal or disciplinary sanctions against the perpetrators of human rights abuses[8] and that these outcomes are required under international law. Without the effective investigation of police misconduct, police criminality and disciplinary offences go without punishment.

In Australia and throughout the world, police are rarely prosecuted or disciplined for torturing, killing, assaulting or mistreating members of the public[9].

Only 4 per cent of complaints against police are substantiated in Victoria.

In contrast, civil litigation against the police results in findings of police misconduct in a significant numbers of cases.[10] While civil litigation offers only a partial solution to the endemic problem of police human rights abuse, its ability to find against police where other accountability mechanisms fail justifies expanding its availability to victims of police abuses.

[5] In Queensland, NSW, the ACT, police investigate or otherwise manage the vast majority of complaints.